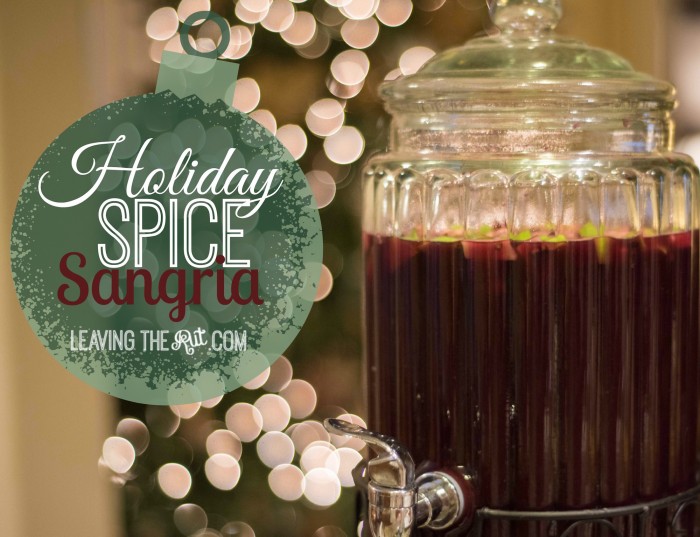 Sangria… it one of those drinks that I can always find an excuse to make and it really goes great with food in just about any season.

When we were in Washington DC last winter, the bartender at the hotel we were staying at had mixed up a batch of sangria and it was absolutely delicious. Aside from more sugar than I prefer in my drinks, it was perfect for the cold wintery night.

I drew some inspiration from the fun “toppings” that she put into her recipe and added them to my favorite sangria recipe to change things up a bit. There were two ingredients that she added to her recipe that I added to my standard recipe to bring in a new holiday taste; whole cloves and cucumber. Yes, cucumber.

I wouldn’t had thought to put cucumbers into my sangria, especially a spiced version, but it works really well. I would have assumed that the fresh vegetable-y flavor of the cucumber would clash with the fruity side of sangria but that was not the case at all. With all the other flavors that are going on in sangria, the cucumber adds a “fresh” taste without overwhelming anything else.

The cloves bring in that holiday flavor that really change up the taste of this recipe and separate it from the summery flavors that are usually associated with sangria.

I usually chill the sangria for about 2 hours with all the ingredients so it has time to absorb the flavors. I taste it, then sometimes remove some of the cucumbers and cloves to keep it from getting too strong. But don’t feel like you need to, it is all personal preference.

Here is what you will need:

1 bottle of dry red wine, whatever is cheap.
1/2 cup of brandy
1/2 cup triple sec
1/4 – 1/2 cup orange juice, to taste
1/2 cup cucumber, sliced into rounds
5-10 whole cloves
2 apples chopped, one for the pitcher and one for adding to individual glasses
any other fruit you feel like adding

Pour the wine into a pitcher and add in all the other ingredients.

Note: if you want to keep track of the cloves to pull them out before serving, add them to a tea steeper like this one to keep them from winding up in someones glass. I usually just leave them in the pitcher loose.

Chill the sangria for 2 hours, or at least let it set at room temp if you don’t have fridge space so that all the flavors can mingle.

Serve over ice and top with chopped apple and other fruit of choice.